A princess and a 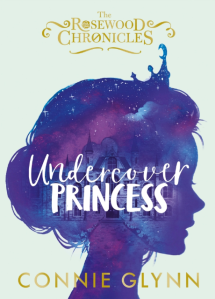 girl who would like to be royalty swap identities when they enter the elite Rosewood school. Sounds like fun, right? I thought so after enjoying the best-selling, “The Selection” by Kiera Cass. As I read, my first impression was that Undercover Princess was for a much younger audience, with a juvenile tone and large font, though with romance for the fourteen- year- olds, plus some unusual interactions. I wasn’t sure. Then there is the writing style…

Publishers usually have a selection process that weeds out clunky writing, and helps get those showing great potential to reach those heights. Unfortunately editors have less time to devote to developing authors now and they must have seen Connie Glynn’s 700 000 followers on You Tube as enough proof she would sell well.

I put the book down every few pages, frustrated with the large amounts of passive voice,  the telling instead of showing, the too many characters introduced at once, and the bumpy rhythm. These are all problems writers have as they start out, but they usually have to work them out before getting published. When the girls who hadn’t got along suddenly felt marvellous about sharing a room without enough reason, I finally gave up – less than a quarter of the way in.

Less discerning readers may like it, and some have posted positive reviews on Goodreads. Others describe a disappointing ending, flimsy antagonist, and confused plot. A few liked the friendship between the girls, but were unsure where the play-biting and nuzzling into hair was going. If it headed towards romance, fine, but that was with a boy later, and treating it as if it’s normal between platonic friends made everyone say, weird.

For princess fans in their early teens who don’t mind a rough-hewn tale.